I have been away from the garage for quite a while, there have been so many distractions (including an amazing 4500 mile, 7 Ferry and 1 Eurotunnel drive to Iceland and back via many cities in the Cayenne). I was not avoiding the build, but I don’t need to be rushed and if other fun is going to be missed, the Cobra can wait a bit. Those German Autobahns…. wow! I managed to get 154mph a few times before I had to slow for other traffic (I was still overtaken near that speed by a tricked-out Audi). The Cayenne was (it is sold) rated at 157mph so I didn’t have much left to explore. The Cayenne was chopped in for a  a pre-loved 2011 997 Carrera GTS, I doubt i’ll get that within 3mph of its top speed… er… that would be 187mph.

Enough twaddle, you can see the new, to me, car. 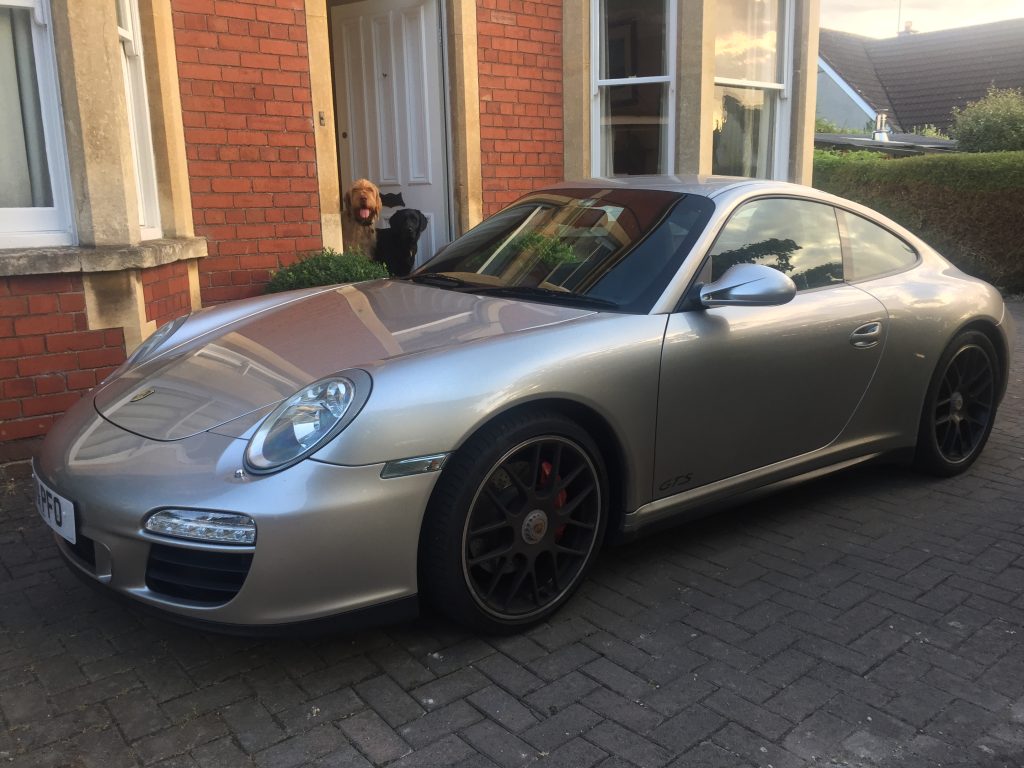 Today I started my build with the heater-box installation. The idea of putting holes in the shiny GRP body does sharpen the mind a tad! So, on with the measuring and templating. Fitting the heater into the passenger side wheel arch compartment is a bit of a tight squeeze so the first thing is to create a template.

After seeing other build websites it is obvious that the heater casing has to be modified. The pipes go towards the inner wing and engine compartment so that side’s mounting flange can stay but there is no room for the outer one. Having cut off the outer flange a lot of measuring allowed a cardboard template to be cut. 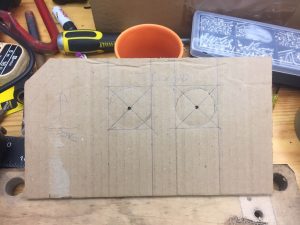 One side flange remains

I marked out the position of the two outlet ducts on the template but I did not cut out the circles, I just punched a small hole at each of the centres of the two 45mm diameter ducts. Bosch make a great hole cutter at 44mm diameter with a pilot drill and that will make an easy and clean cutting job that I can ease out with a sanding cylinder on the Dremel, so I only need the centre points.

I double-checked the template for accuracy of the heater face and then made some rings of duct tape, sticky side out, and used that as double-sided tape to mount the template as high and as close to the outer wing as looked ok to clear a mm or so. 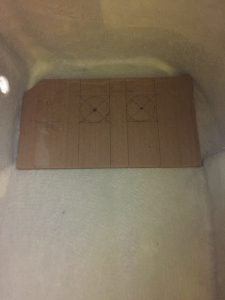 I then drilled 3mm pilot holes into the foot-well for the duct connection centres. The template has done 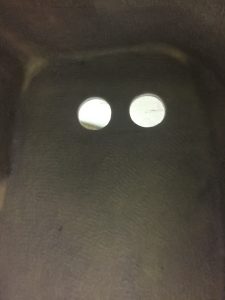 its first job; I then used the Bosch hole cutter to make two clean holes from the foot well into the wheel arch compartment. I removed the duct connector from the heater and checked the holes, a little light sanding and the connector just slid in place! (three cheers for measure twice, maybe three times, and then cut once).

I then set to drilling holes to take rivnuts in the heater flange and casing. I used the heater-blanking plate, hand-held over the heater matrix, to protect against damage as drilling sheet metal often has the drill being pulled though like crazy. 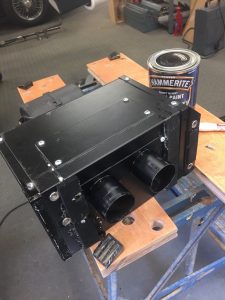 I have Hammerite protected all cut metal.

Installing my first M6 rivnuts (304 Stainless) was interesting, the short-handle setting tool couldn’t provide enough leverage for me (you would have needed the strangely absent 400 pound gorilla to assist) so I ended up putting the rivnut-setting tool handles in my bench vice and winding… job done but I think if I have more to do maybe a different tool is needed?

The angle drive on the Dremel allowed me to make pilot holes for the bolt holes which were finished from the foot well. The final bolting into position was with penny washers to spread the load and some foam neoprene on the heater to give a chance of taking up the uneven GRP surface without stress.

I had to open up the heater-hose holes in the inner wing as there is no way that they line up with the heater connections. I am have hole-cut to incorporate the existing holes and have created a stainless escutcheon with some polished sheet I have bought.

I have set out out the (silicone) hose centres as they to be in an unstressed position so no undue wear can take place at the grommet as they enter the engine bay and created a stainless escutheon plate to tidy things up and carry grommets.

The next thing, for both under-wing compartments was to make a better way of securing the cover plates. I elected to use M5 Big Head Nut fixings from CBS, glassed into place to take bolts. I am also fitting a foam rubber trim to the cover plates.

This site uses Akismet to reduce spam. Learn how your comment data is processed.

Please select the Tab Content in the Widget Settings.